Spain is the best country for lovers of castles, since the number of the preserved and its artistic, historical and chronological variety is enormous. Still persist in our country a good collection of ruins and castles in acceptable state that almost completely preserve its pure medieval structure. A good route to visit some of these castles, if we have a long weekend, runs through the province of Toledo.

The gastronomic councils to take into account in this trip are: to enjoy the Manchego cheese (with denomination of origin), to eat the humble, but delicious, Toledo sausage, the goat cheese, the hams, the manchego lamb, the sausages and the many dishes of Hunting. Let’s not forget that we are in the largest hunting reserve in Spain: The Montes de Toledo. The pastries and confectionery are excellent, taking into the marzipan their great jewel.

Starting from the city, whose visit can be left by the end of the trip, by the N-401 in the direction of Ciudad Real we find:

Almonacid de Toledo, whose castle, located on a hill, was one of the strongest of the average brand in the region of Toledo.

Mascaraque, whose origin dates back to the times of the Arab domination, when the castle was built that would be after the comune Juan de Padilla, then passing to the Dukes of Abrantes.

We continue on our way to the nearby Mora, a town surrounded by a million and a half of olive trees that one kilometer from the town, on a hill on the road that leads to Tembleque, preserves the remains of the Castillo de Peñas Negras. Mora continues to keep the artisan tradition alive. We can visit a curious workshop where they manufacture cowbells and another dedicated to the manufacture of rugs.

We headed for the N-400 to Consuegra, turning previously to visit the small town of Manzaneque that preserves a castle built in the 15th century. After 25 kilometres we arrived at Consuegra, an important population of La Mancha Toledo of Roman origin. It is dominated by Mount Calderico in which stands a typical cresting manchego with windmills and the castle. From here we can contemplate a beautiful panorama of La Mancha and an interesting perspective of the urban complex.

If we go the last weekend of October, we can see the feast of the Rose of saffron, with contests of flower peel that “born when the sun rises and dies in the afternoon.” We can taste and buy here four products with denomination of origin: Saffron, cheese, oil and wine.

In the Yébenes we find two churches of the 16th century, one, Renaissance dedicated to Santa Maria and the other to San Juan Bautista. In the Sierra de Los Yébenes there is a coat with cave paintings. From the top of the mountain range you will be able to see one of the most spectacular panoramic views of the area.

We will continue on our way to Orgaz, an important agricultural and livestock village located on a plain. Its foundation is very old. After the Christian conquest his first Lord was the Cid Campeador, being the birthplace of his wife Doña Ximena. The visit can be followed by the Plaza Mayor, which is the typical example of the squares with arcades of the towns of Toledo and in which we can taste the rich gastronomy of this area.

We will go to Arisgotas, where we can see a large number of Visigoths carved from the walls of some houses on the way to Sonseca, we find the so-called Torre Tolanca that are the remains of a watchtower

We arrived at Sonseca, a town that has an important furniture industry and famous for the exquisiteness of its sweets and marzipan.

Leaving the town, in the direction of Toledo, on the left, take the road CM-410, Cross Mazarambroz, town of medieval origin, name coming from the farm or Arab farmhouse called Molino de Amrus.

The next village is Cuerva, typical population of the foothills of the Toledo Mountains. The castle preserved today is from the 15th-16th centuries.

Very next, the imposing villa of sales with Peña Aguilera, hunters ‘ paradise. The village is located in the foothills of Cerro Peña Aguilera. We can walk up to the summit where the hermitage of Ntra is located. Mrs. of the eagle. From here we have a magnificent view of the Chestnut mountain range and the crystalline plateau. Both gastronomy and leather handicrafts revolve around hunting.

The following locality is Menasalbas, population of Roman origin as attested by the archaeological remains that have been found in it. Very close to the town we can visit the Torcón Reservoir, where you can practice fishing.

We arrived at San Martín de Montalbán, whose main interest is focused on the two singular monuments of its municipality: Santa María de Melque and the Castillo de Montalbán. A few kilometres away, in the direction of Puebla de Montalbán we find a crossroads; The left takes us to Montalbán Castle (on a private estate), built by the Knights Templar, on one of Muslim origin. The road to the right takes us to the church of Santa Maria de Melque. The church is one of the most subjugated in Spain, both for its architectural characteristics and for its dark origin.

We take the road that goes to Toledo and we arrive to Polán, where, in the center of the population, is preserved what should have been a castle of considerable dimensions, work of the XII century with additives of the XIV. We can approach the neighboring Noez to ascend to the peak of the same name (1,034 m) between Jara, thyme, lavender and Holm oaks to enjoy the best view of the territory we are traveling.

We return to our steps and arrive to Guadamur where, next to the town, stands an important fortress Palace (private property) of the 15th century, perfectly enabled and restored.

We finish this route in Toledo and as a culmination of the route of the castles we will stop to visit quietly this city museum that may be the city with more history of Spain. We will enjoy its monuments, and enjoy wondering in the Jewish quarter and in the medieval, we will buy handicrafts in its numerous shops, we will taste its varied gastronomy in countless restaurants or its magnificent pastries, especially we will enjoy with the Marzipan, an exquisite sweet craftsman.

After this long excursion, we will spend the night in one of the many excellent hotels. A tip, come to the national Parador of tourism, you will enjoy a magnificent view of this Imperial city. 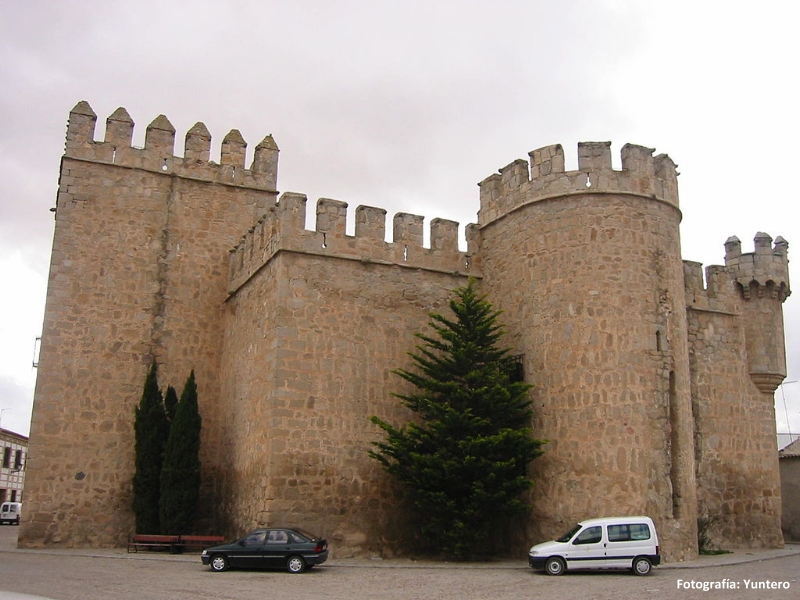